In this, the second part of the bomb shelter excavation project, my efforts were given over to finding and excavating the hidden entrance at the other end of the shelter. 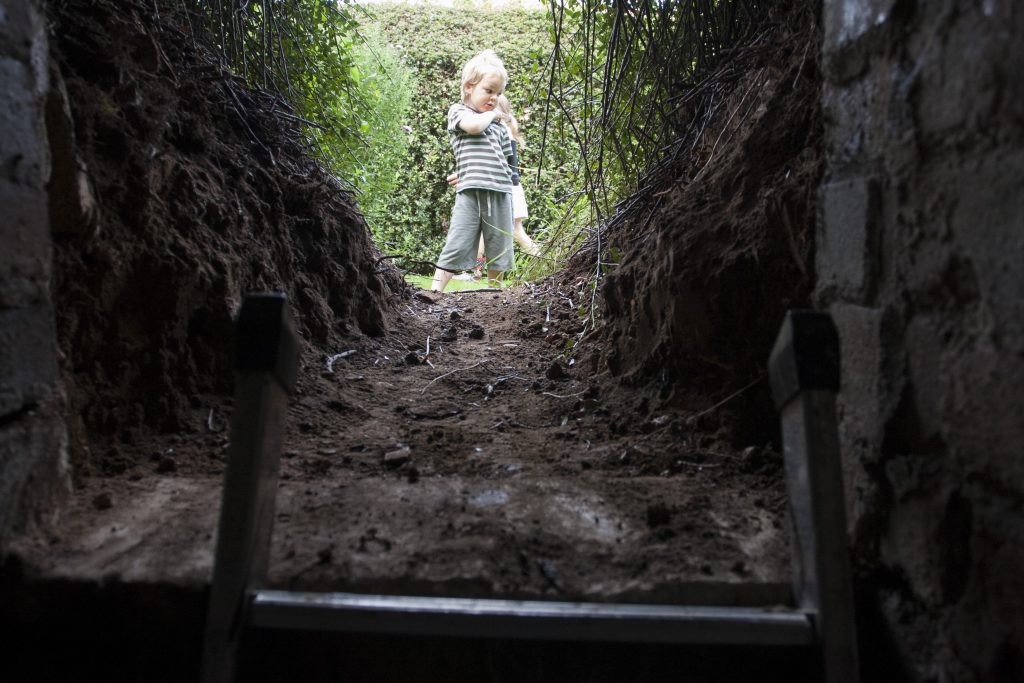 At the top of the ladder

I arrived at the farm armed with some string, a tape measure, clippers, gloves, sledgehammer, normal hammer, crowbar, work boots, notebook and a change of clothes. My plan was to measure the inner dimensions of the shelter and mark them as best I could on the ground above using the string and pegs. Of course, the mound was covered with trees and bushes, so it was not possible to trace the corridors on the earth directly above, but I thought I would be able to work out the distance from one point to another and then mark them on the grass alongside. 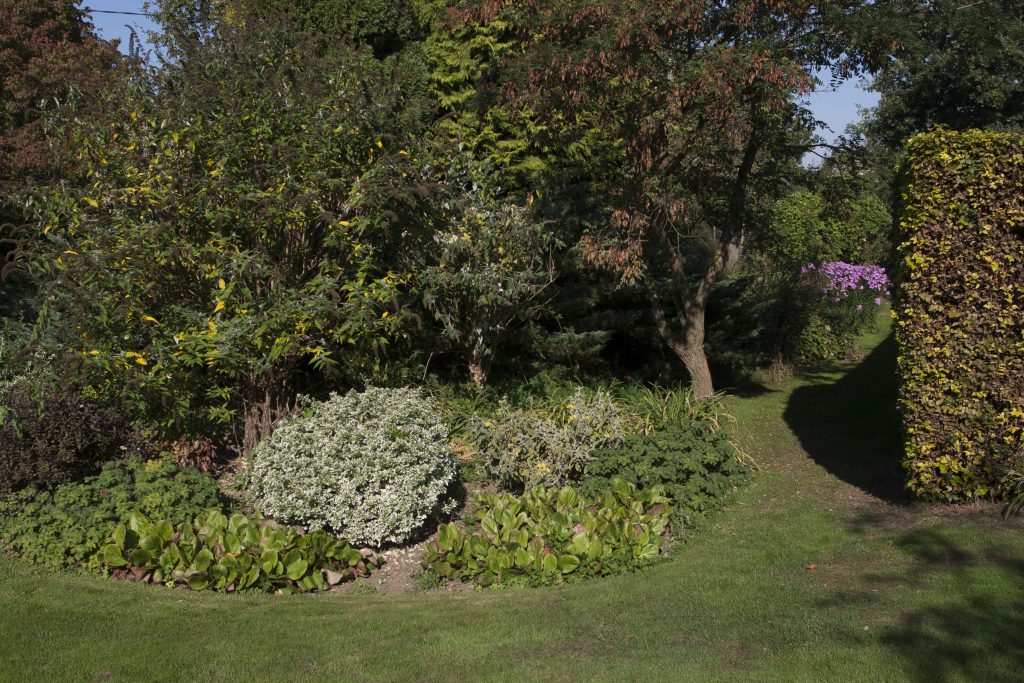 This lovely looking bed of shrubs and trees conceals the bomb shelter. The entrance cut through the bush in Part 1 is at the far end on the left. The blocked entrance come up under the bushes in the foreground!

The first thing I had to do was open up the chicken wire door I’d made on my last visit, let down a ladder and enter the shelter, taking the torch, notebook, pencil and tape measure. The first corridor actually measured 10 feet in length, whereas the one at the far end was 13 feet, so I knew that the blocked passage must rise up slightly further towards the nearside of the hill than the open doorway, and therefore a little closer to the edge of the flower bed.

By totting up the combined length of the central seating area and the two corridors either side of it, I worked out how far apart the two openings would be from one another. I marked this out with string and pegs and then added on about five feet to account for the travel of a staircase rising to the surface. Unfortunately the most likely looking spot was right under a large and well-established low-growing conifer. I started looking closely at the ground under the bush to see if there were any depressions or mounds of masonry visible at the surface. 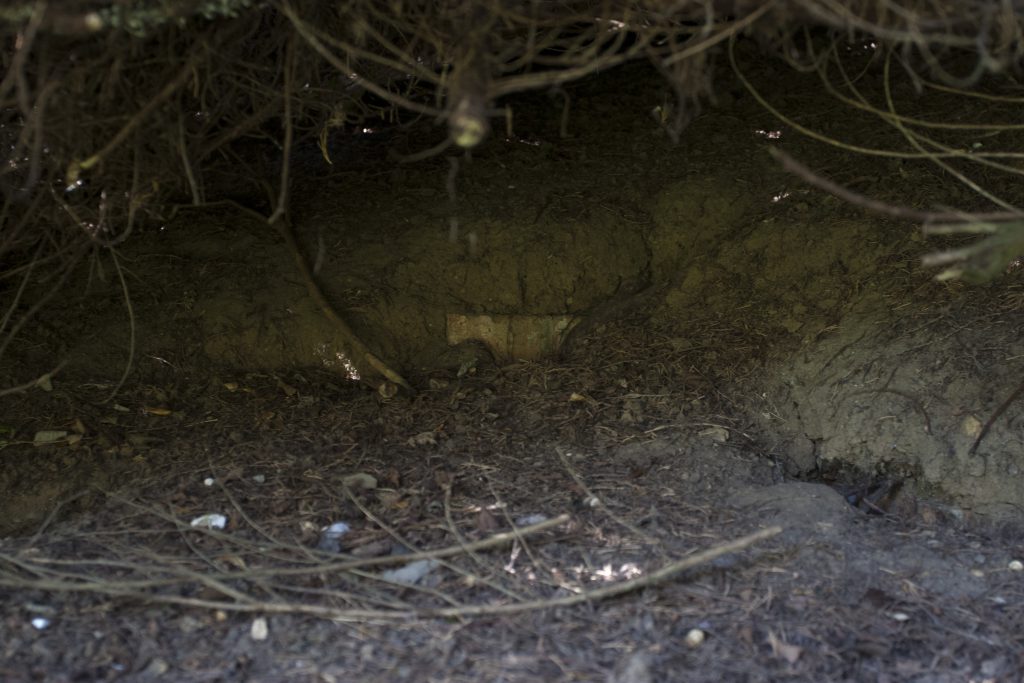 After cutting back the lower branches of a conifer, I could just make out an indentation which looked like it could be the hidden entrance

There wasn’t much to see, except two very small holes in the soil near to one another, a very gentle depression in the slope of the mound, and what looked like the side of a brick just poking out of the earth. Concluding that these features were indeed evidence of the hidden entrance, I began clipping back the lower branches of the conifer that covered them until I could crawl under on my belly to take a closer look.

After a little preliminary digging, I became confident that I had found the way in and proceeded to cut back more branches so that I could at least sit up and take some pictures.

This time my angle of approach was 90 degrees to the stairway, but I decided to continue digging from the side as it caused minimal damage to the conifer. The more earth I removed, the easier it became to get under the bush, but there was quite a lot to get through before I could access the area of the entrance. 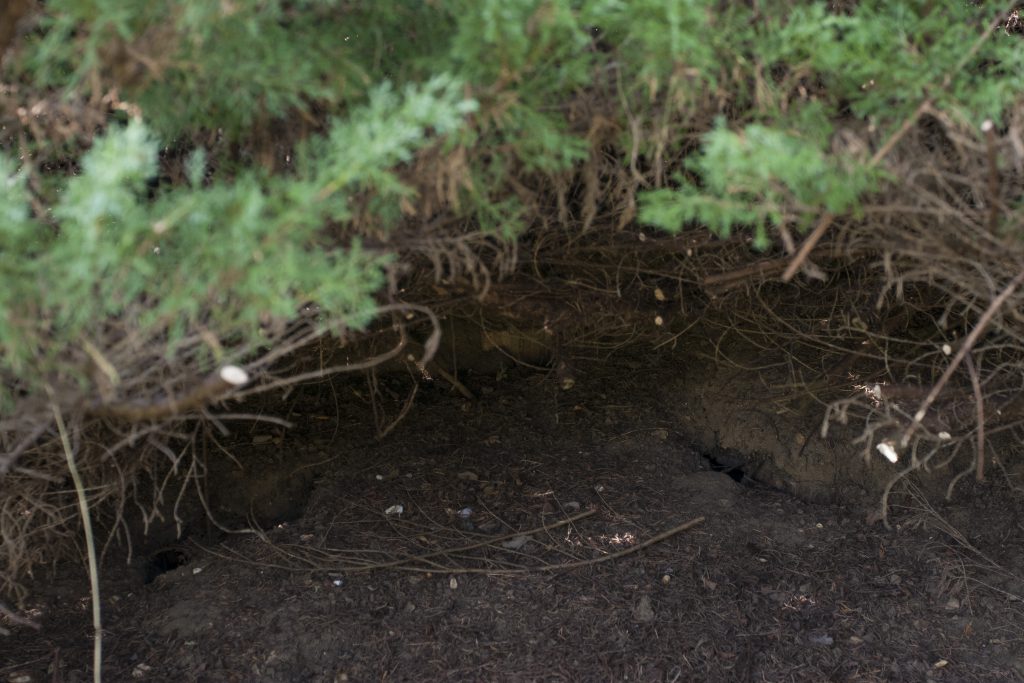 Having cut away some more branches I had better access to the dig site. In this pic, you can make out a couple of holes in the soil and a slight indentation

Unfortunately, I soon found that I was faced with a problem. That season there had been a severe drought and the ground was like rock. Clearly no rain had penetrated the surface for a long time and no worms were helping by loosening the soil. Furthermore, each drive of the spade hit a thick root, lump of flint or broken chunk of masonry. Without being able to stand up and dig, progress became very slow.

Still, as I began to remove the soil, I exposed a strip of metal looking like a support for a row of bricks. I could also clearly make out a wall and what looked like the pillar of the doorway.

I dug under the rusty steel support and disturbed at toad who was reluctant to leave his corner. There were literally hundreds of snail shells in this space and several more toads.

As the soil level dropped further I began to see the shape of the doorway more clearly.

I couldn’t be sure if the lumps of masonry that I was digging up were parts of a collapsed retaining wall or simply pieces of rubble used to block up the entrance, but I was hoping that the majority of the entrance structure was still intact underground. 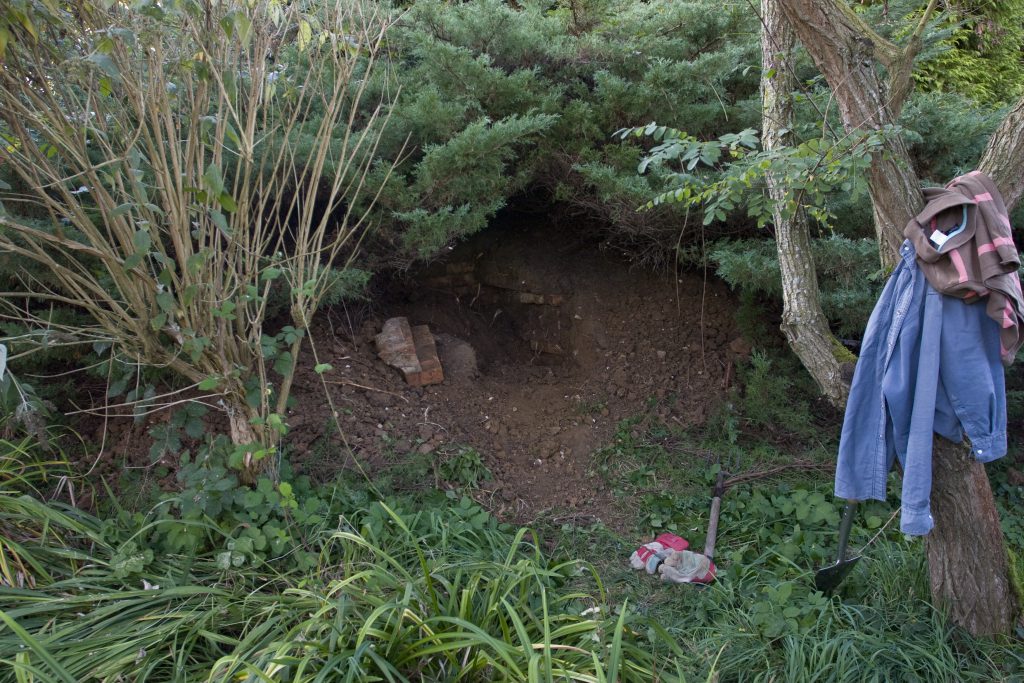 After a few hours digging, the day was over and nothing more could be done. I’d managed to reveal about half a meter of the entrance structure, but progress had been hampered by the bush overhead, the rock-hard soil and the embedded blocks of rubble. The summer was drawing to an end and my friend moved from her family home, reducing the opportunities to go back and dig.

Despite my best efforts, the small air inlet tube proved to be impossible to find, for I was unable to mark out the measurements on the mound, which was densely covered with conifers and other bushes. I cut my way up onto the top and spent some time searching about for the inlet, but could only find a nest of baby mice under an old tree stump!

The entrance is hard to make out, but it is here and slopes down from left to right. The bricks in view on the right are part of the door frame and step downwards

Hopefully one day soon I’ll get the chance to complete the dig and follow in the footsteps of those who used the shelter 70 years ago, but for now at least the entrance stubbornly remains blocked.

To return to Part 1 of the Bomb Shelter Excavation Project, here’s a link: Part 1