In Part 3, we take a very close look at the live studio setup that Brian, Karl and their collaborators were using to develop more material and a live sound for potential gigs. 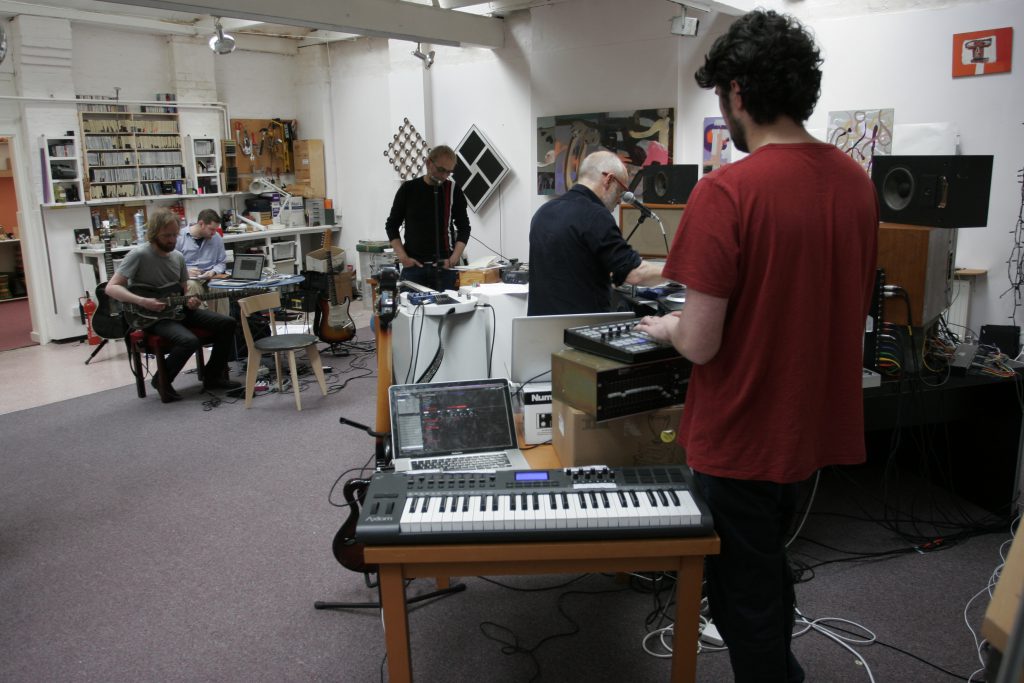 The Session
On the day Sound & Recording visited Brian’s Notting Hill studio, Brian and Karl were joined by guitarist Leo Abrahams, and Someday World co-producer Fred Gibson. The visiting time was late afternoon, so by the time we arrived, the musicians were in full swing and sounded like a very tight unit.
Apparently there had been a total of nine musician’s present the day before, but this time the four were joined by poet Rick Holland who had previously collaborated with Brian on the 2011 album Drums Between The Bells.
Also present was pianist, composer and software designer Peter Chilvers, who created the generative iOS app ‘Bloom’ together with Brian in 2008. On this day, however, Peter was acting as the engineer, saving every session in Logic Audio and patching various signal feeds into the monitor mix using a Makie CR1604 desk, whenever he was required to do so.
Although Someday World had been recorded in a side room of Brian’s studio, the jam sessions took place in the much larger central open-plan area, where there was enough space for musicians, engineers and journalists to move about freely.
From the perspective of a spectator entering the studio, Fred Gibson was stationed on far right, operating a Native Instruments Maschine hardware controller with its software running on a Mac Book Pro laptop. Occasionally Fred sat down to work from an M-Audio Axiom 49 MIDI keyboard, which was connected to Apple’s MainStage live performance software, accessed via the same laptop he used for NI’s Maschine. On this day Fred was mostly playing bass sounds on the Axiom and providing drums with Maschine.
Brian’s setup was to the left of Fred’s, and included a vintage electric guitar laying across a plinth and being fed into a Behringer V-tone DI GDI21 amp modeller/preamp. Brian played the guitar while it was lying down using a metal slide, rather like a pedal steel guitar. Brian also had Ampeg bass guitar on a stand, but did not put it to use during our visit, and an M-Audio Oxygen 61 controller keyboard, which was used for triggering samples on an Apple laptop. At one point in the session an extra pair of hands were needed, so Peter Chilvers was called across to hold notes on Brian’s Oxygen 61 controller.
“I wasn’t really doing anything musically,” he explains, “other than acting as a glorified sustain pedal! Brian wanted a chord to carry on playing, but needed hands free to play with the Air FX, so asked me to carry on holding the chord he was playing.”
The rest of Brian’s setup sat on top of two Samson Resolve 80a monitors. Straddling both speakers was a Numark M101 two-channel DJ scratch mixer, and to its right sat a Numark Axis 9 CD player with loop, stutter and speed controls. The stutter effect in particular was something Brian used quite a lot during the session. To the left of the M101, Brian had an Alesis Air FX multi-effects processor feeding into a Korg Kaoss Pad and he used the two for various audio modulation duties.
Karl’s work area was in the centre, where he had his own table supporting a Roland Cube 15x amp, Eventide Harmoniser PitchFactor, MXR EQ and Pioneer CDJ-1000MK3 CD player. Also on his table were two Ebows and a pile of note books that he used as lyric resources.
The DAW system, represented by two large monitor screens, was between Karl and Brian, where there was just enough room for Peter Chilvers to work. A Korg Triton Studio workstation was also within the control area, although no one used it during the session.
Leo Abrahams was seated on the right of Karl, and had his own table supporting a Mac Book Pro from which he could access his sound library. On the floor in front was an array of guitar pedals wired into one another. An Electro-Harmonix Ring Thing modulator was feeding a Earthquake Devices Rainbow Machine pitch shifter/modulator, which in turn fed the input of a Boss PS3 digital pitch shifter. The out from the PS3 fed into a Pigtronix Echolution 2 multitap modulation delay, and the rig also included an expression pedal.
“Leo really understand those boxes, as well as that guitar,” says Brian. “It’s not like he plays guitar and sticks a few funny noises on, he works with those sounds and spends a long time developing them so they are really part of the instrument.”
The poet, Rick Holland, took up a position on the far right, just in front of a long work desk and tool rack, so as not to interfere with the movements of the musicians.
“He was writing down lyrics and phrases as the session progressed, and leaving them on Brian’s plinth,” explains Peter Chilvers. “Usually short phrases, a line or two at a time in large letters, and Brian picked the ones that he felt like singing or speaking. Brian was keen that the voice was an early presence in these recordings rather than something bolted on later over an instrumental. Having lyrics to hand made that process far more immediate. Karl was also providing lyrics, and sometimes he and Rick were responding to each other. In some cases, Karl was also playing recorded voices from his CD player.” 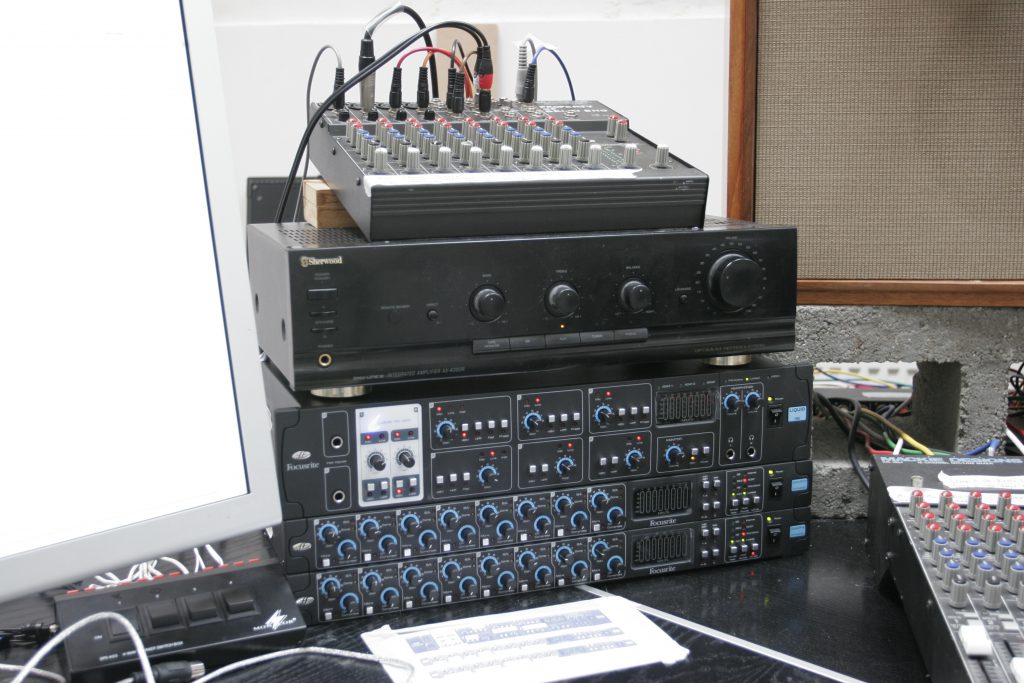 In this shot we can see the Focusrite Octopre preamps, and a Liquid Saffire 56 multichannel Firewire interface, a Mackie Micro Series 1202 sub mixer sitting on top of the amp, and on the far right is the Mackie CR1604 which provided 16 channels that could be added to the monitoring mix at any timer

Specific Requirements
One of the main requirements of the session was that a large number of instruments and microphones had to be permanently connected so that they could be used at anytime. This was so that the musicians could freely follow whatever idea came to them in the moment. It was also necessary to be able to adjust the monitoring levels without going near a software control panel or affecting the recording, and the monitoring needed to have zero latency.
A further complication was that it had to be possible to send any of the instruments off to a physical effects chain, such as that of Brian’s Alesis Air Fx and Korg Kaoss pad, without passing through the software, so that the output of the effects chain could be captured separately.
To make all this possible, Peter installed two Focusrite Octopre preamps, and a Liquid Saffire 56 multichannel Firewire interface. The Liquid Saffire acted as the computer interface for the audio, but also passed the raw signals on to a Mackie CR-1604, which provided 16 channels that could be added to the monitoring mix at any time. The setup also enabled Peter to send the monitoring mix back into the computer, which provided the team with a valuable mix reference.
Strips of masking tape stuck across the top and bottom of the CR-1604 had been labelled so that Peter could see at a glance which inputs were routed to each channel. Brian’s vocal mic, a Shure SM58, was on channel one and Karl’s was on three, but input two was a spare mic channel reserved for another source. Brian’s Numark CD player, and Karl’s Pioneer were given stereo channels each. During the session both musicians were feeding samples into the mix from these and using effects like stutter to process them. According to Peter, the female vocals that were being mixed in during our visit had been recorded to CD earlier that very day by Karl.
Another input was marked Karl Radio and was reserved for a radio which Karl would randomly tune in and out from time to time.
The remaining inputs included a spare channel, plus ones for Karl’s guitar, the stereo feed from a Mackie Micro Series 1202 sub mixer, and Brian’s laptop computer from which he fed a number of pre-prepared loops. The mixer’s two send channels were assigned to the Kaoss Pad’s left and right inputs respectively so any combination of the main mixer inputs could be fed into it (and the Air FX), and an auxiliary channel was used for the return.
Although no click track was used to keep the musicians in time during the sessions, usually there was some kind of loop providing a rhythmical base or regular pattern. One the occasions when a loop was not used, however, the musician’s simply kept in time with each other in the old-fashioned way.
“When we had a nine-piece band in here there wasn’t even a loop,” insists Karl. “There was drums, percussion, three keyboards, three guitars, bass player and five of us singing. That’s really exciting. I’ve worked with sequencers for over 20 years, and whilst it is great to know where the beat is coming round, you only need to be close to the drummer to know what the groove is and be in the groove. It’s actually quite restrictive to have the click coming from those things in your ears, just so you can lock to the beat, and they disconnect you from the sound.
“I feel it should be more of an exploration, where you can say, ‘Now we are going to stay here for a while because the drummer’s playing great, let’s just hang on and give him some space.”

Brian’s vintage electric guitar laying across a plinth and being fed into a Behringer V-tone DI GDI21 amp modeller/preamp.

A Happy World
In the final analysis, Someday World feels exuberant and exhibits a likable energy with its intertwining synth and guitar lines and restless rhythms. The enthusiasm of Karl and Brian was very apparent at the interview session and clearly the positive experience both had of improvising together has made its way into the album recordings.
“It’s a rare find when you come across somebody that you connect with in such a way that there is not a lot that needs to be said, and that is what I have found working with Brian, and in working with Fred and Leo as well,” concludes Karl.
“When we got together in that little room through the winter and started to make it into pieces that were more complete, I suppose you could say it was good fun. It sounds a bit crass to say good fun but it was extremely good fun, continuously, every day.
“Coming to work on this record I’d do a four hour round journey home and back, which should really have made me quite miserable, but I love working with Brian. So I was just happy all the time creating that album in that tiny room. I was waiting for the day where I wouldn’t be happy but I gave up waiting because it wasn’t happening!”
Brian agrees, but can’t resist joking about it. “It was a very nice experience, which is why the album is so ridiculously joyful. We are trying to correct that with this new work, so we’ll look like the grim, industrial victims of modern technology that we really are!” PP

More pictures of the jam session can be seen here in Part 4, of Brian Eno and Karl Hyde: Recording Someday World: Part 4