In Part 2, Brian and Karl explain how Someday World was recorded and mixed.

Brian at work in the studio

Starting To Record
Almost all of the recording of Someday World was done in a small room in Brian’s Notting Hill studio, although when Karl’s guitar proved to be a little loud, his amp was moved out into the large room next door.
Co-producing the album was 20 year-old Fred Gibson, who was virtually unknown in the world of music production. It was during a chance meeting that Fred managed to impress Brian with his advanced knowledge of computer audio software.
“One of Fred’s best friends, Ed, is the son of a friend of mine who belongs to the A capella singing group that I have here,” explains Brian. “One day she asked me if Ed, could come over to look at my music stuff, because Ed is a scientist. He was about 16 at the time. He came round and brought Fred with him. I was showing them how you can do this and that with Logic, assuming they knew nothing about it at all, and I said, ‘Actually you can really probably do anything,’ and then I named something and said, ‘you can probably do that too but I wouldn’t know how to do it,’ and Fred very politely leaned over and said, ‘Well, actually it is quite easy, if you take a Sys Ex message…’, and I realized that he knew that program with a depth that I had never even dreamed of! But he is a very good musician and writer as well and he’ll be a big name. He joined the A capella group and I let him use the studio a few times to work on his own music with friends when I wasn’t using it. And then I asked him to help us out and he proved to be very important to the whole thing.”
One thing Brian was particularly keen to do was work fast. He did not want the production to become too methodical and laboured, as that would cancel out the excitement he and Karl were trying to create by using improvisation and spontaneity. In all, the project took just five-and-a-half weeks, thereby overrunning the initial four-week plan a little (although relative to many projects it was still very quick!).
“I am sick of albums that take two years,” insists Brian, “so we just decided on a deadline. I have a theory that deadlines are responsible for most good art. Deadlines are good because they stop you overcooking something. Albums that take years to make are like bad French food, where it has been so long in the preparation that everything is dead by the time it reaches you, whereas my dream of how to make music is like they make food in a busy Italian restaurant. They have fantastic ingredients and they do as little to them as possible. They just get them hot, put them together and give it to you.
“I once took a band that I was about to produce, after they had made a laboured and complicated album, for dinner in a very good Italian restaurant, and I arranged with the restaurant manager to take them into the kitchen. So I sat them down to dinner and said ‘Now I want to show you how we are going to make your next record’, and I took them all into the kitchen and it was just chaos with flames, and cooks and waiters doing things really quickly. It was exciting.”

The door to the small room in which most of Someday World was recorded can be seen in this photograph. Karl’s amp was eventually moved out into the main room seen here.

Constant Mixing
Another important choice the pair made was to record and mix simultaneously, rather than having a period of recording followed by a block of mixing. Once again, the idea was to maintain the vibe of the music and not let the material become overworked.
“There were no mixing days,” reveals Karl, “the mixing was going on all the time so there was no separation between recording and mixing and we recorded up to the day that it was handed in.
“We have both experienced one of the negative sides of making records where you spend all that time recording and getting everything balanced and sounding exciting and you are really thrilled by it, then the place gets tidied up, everyone changes their shirt and you go into mixing mode. All the faders get pulled down and you are completely disconnected from the vibe of the music. The first record I ever made was like that. After a few days in a little studio in London it was sounding fantastic, and the engineer did that and we never got it back. But the great thin about working in-the-box with a computer, is the mix is there so you don’t need a great SSL with total recall to bring back the mix.
So there wasn’t a mixing day, there was just a delivery day, which was a few hours after we finished recording.”
In their five-and-half weeks together, Brian and Karl also recorded material which wasn’t included on the final album. Brian explains what has become of the rest of it. “There’s quite a lot of it, but not much that we actually finished! The album takes its title from a song that we finished but didn’t put on the album, which is actually a very nice song, and there was another one that had Benjamin Zephaniah on which was pretty well finished.
“Then there were several others that we abandoned along the way. They got to a point where we though they were probably not going to make it so we stopped working on them.”
“Some sounded great and you think they are fantastic but they don’t seem to fit the sonic picture,” adds Karl, “so we’ve put those to one side and we’ll revisit them.” 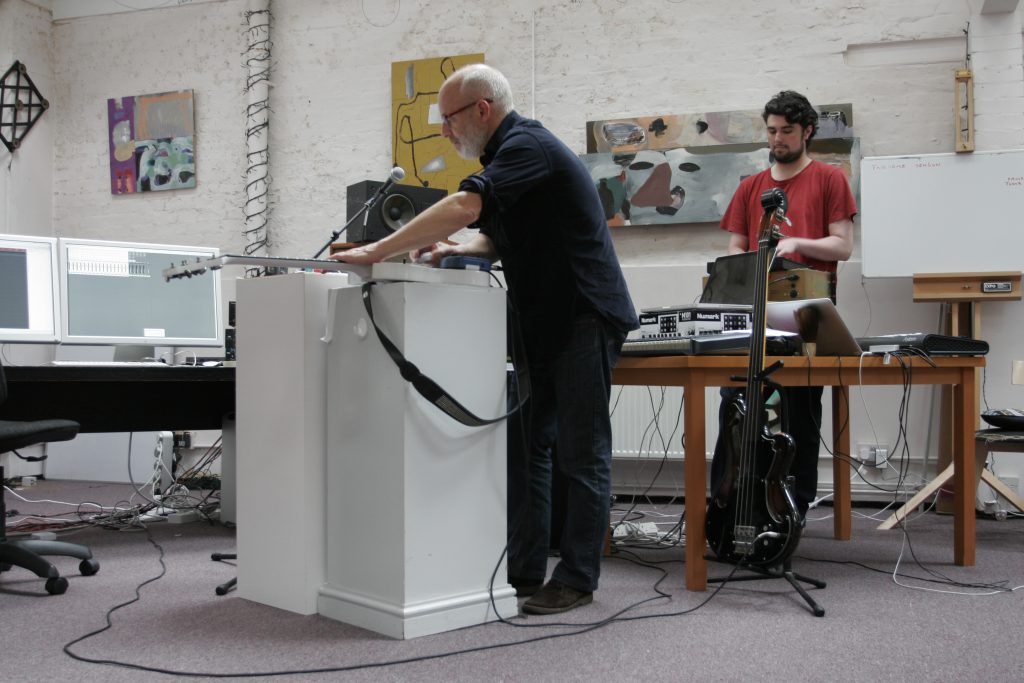 Brian playing slide guitar and processing it through his chain of effects.

Live In The Studio
Brian is not a fan of press interviews, so instead of sitting down with a continuous stream of journalists and describing the recording process in great detail over and over, he and Karl decided to have a series of open house sessions where members of the press could visit during set times and witness first-hand the creative process used to make Someday World.
The sessions also gave Brian and Karl the chance to revisit their Reickuti concept, develop new material for a possible follow up album, and prepare for any live appearances they eventually decide to do.
“We were just following a journey, so although we started off with an idea we didn’t end up at the place we originally intended to end up, which is why we are doing this,” says Karl. “We remained open and followed the route of the things that were happening, it just took it off in another direction. We’ve now gone back up the other road that we first intended to go up!
“We’ve assembled a nine-piece band and played some of the music and we may do some small appearances, but we want to develop the sound of a band further than the album. You either take a band on tour to find your voice or signature sound, or you spend more time developing that sound so that you can pass it on to the people you work with, so we decided to do the latter.
“In a lot of live shows audiences get played the album. I remember as a kid hearing on radio someone saying that it is fantastic that you can go and see the band 10CC and the show sounds just like the record, but why would you want to go and see somebody when it’s just like the record? I want to see something else.
“We both felt that there wasn’t enough material to justify live performances,” adds Brian. “Anyway, we didn’t want to go out and play the songs just as they are on the record. Festivals are so successful now because there is the possibility of something unscripted happening. It often doesn’t, but there is the possibility that the band is going to go slightly off-piste and do something surprising, even to themselves.”